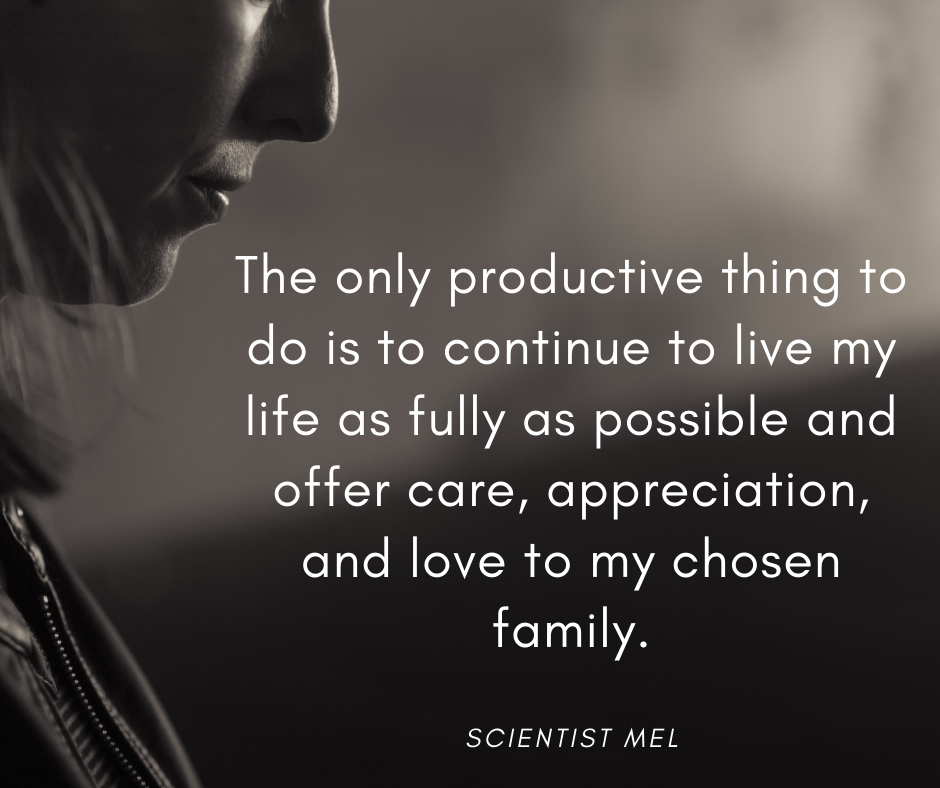 Let me start by saying I am not a clinician, psychologist, or mental health professional. While I do not have the professional experience to relate mental health advice to others, I can discuss my personal experiences involving grieving estranged family and how I cope with it. If you are struggling, please seek appropriate counseling to meet your individual needs.

I had the foresight and strength to develop boundaries once I started to learn the truth of certain family members. I have completely removed my biological father from my life for over 20 years. I honestly feel nothing regarding his existence. He was a terrible person to me, my mom, and my siblings. I struggled for a time with the thoughts that my dad did not love me…something we are all told that has to happen in order for a child to be “normal. Society through media, school, and archaic authority figures beats it into us that we MUST have both parents to be a normal person. Struggling with this often incorrect idealogy of a perfect famiy ie: The Waltons adds shame and an idea that somehow family is less than if it is not complete with full pairs of parents and grandparents where everyone says I LOVE YOU and GOOD NIGHT to each other. This ideaology is not only false but entirely harmful as people will exhaust their resources, mental health, and energy trying to gain the smallest amout of love and affection from people who refuse to give it.

It was long ago that I came to terms with the behavior of certain toxic and abusive family members. I established boundaries and took it upon myself to maintain them for my own sanity and self care. I made a point to shift my way of thinking in that I do not need the perceived love and affection from abusive people. They do not need me to degrade, abuse, and use in whatever manner they wish. I recognized they are nothing like me and will never evolve, adapt, or attempt to understand who I am and what is important to me. I already knew what was important to them as they forced it on me all of the time…and it in no way involved anything relating to me.

It is a strange mix of emotions when an abusive, estranged family member dies.

Feelings of relief, acceptance, anger, and grief flood the mind like a broken dam on an otherwise tranquil village. For some the feelings can last a long time until resolution (often through counseling) is achieved. Fortunately the feelings I experienced subsided within a day as I had already mourned the loss of who I thought they were.

I recently attended my grandfather’s funeral. It was difficult to endure not because of sadness for the loss of my grandfather, but for the white washing and glorious lived experiences of others who never saw or heard how horrible he actually was. His death was a kindness not only for him as he was approaching 90 years old and survived several strokes, heart attacks, and brain cancer…but also for the people he abused. I had no interest in actually going to the funeral except to be there for the family he had hurt time and time again.

My grandfather was sexist, racist, homophobic, transphobic, bigoted, former alcoholic, child abuser, war veteran, and a fundamentalist Christian. I will refrain from speaking about the things my mother went through as that is not my story to tell. I will say this, the horrors she was put through would have landed both of my grandparents in prison had this happened in current times. Having grown up in the presence of my mother and spent copious amounts of hours in counseling, I completely understand her behavior and see the pain of that abuse on her face every time she speaks of it. I tolerated my grandparents because my mom asked me to…I stopped visiting them when I could no longer stand to be around the bigoted and sexist talk as well as knowing the abuse they have doled out and refused to acknowledge.

The gender inequality I learned early on when my grandparents ignored much of what I did growing up. My grandparents focused primarily on my male cousins paying for their clothes, buying them shoes, buying their football equipment, and contributing to their success including them in trips when they traveled. In my single parent home… we nearly lost our house, barely had enough food, our father stopped paying child support ($300/month for 3 kids), could barely participate in extra curricular activities (due to cost). It was at the funeral that I found out my grandparents had not only favored my male cousins supporting them and giving them affection when I saw it…but they were also financially helping them while we were nearly homeless. That added insult to injury as I knew my grandparents would often meet my biological father for lunch (them paying) and tell him how much they missed him. My father was terribly abusive and this was what they would do.

My grandparents could not understand how it was that I gained 4 degrees. They would look at me and talk about how they would have conversations with my male cousins saying, “We knew you were smart but we didn’t think you were that smart.” My grandmother asked how I learned things and I said that I read. I understand some of this is a generational disconnect where women were just home making baby generators. However, they stopped attending my graduations though I am the most educated person in my family on both sidfes since we came to this country. I was the first to get 2 post grad degrees in the history of my family. My siblings are also educated. None of my male cousins are educated and quit college because it was too hard.

The abusive behavior from my grandparents never stopped as others started to pull me aside and tell me what they had recently done. I found out my grandfather threatened to use a lamp to beat another younger family member (one of his great grand childen) because he found out that they were uncertain of their gender identity. He said he would beat them as if they were a man if that is what they wanted. They continued to verbally abuse my mother though she went to their house and took care of them daily. Every once in a while a compliment would come on how smart I was, but only followed by a sexist comment and bewilderment that I finished college 4 times.

They both considered being a woman a disability and I should just be resigned to marry and never want more than that.

On the day of the funeral, I was stoic and stood by family who had been hurt by my grandfather. We remained silent as this was not the time nor the place to discuss such matters. I was kind to everyone including my grandmother who barely recognized me. I was not sad or disappointed by this. I just endured the services offering small snacks to family and minding my own, staying out of the way. The speeches people gave at the funeral had me silently seething with rage. I had no idea that my grandparents protected my male cousins while my family struggled to survive. The minister spoke on how no one ever had anything terrible to say about my grandfather…that did not surprise me as he put on a show for the other people pretending to be a wonderful servant of god while he privately abused, neglected, and ignored the rest of us…the ones who lacked testicles and came from the daughter he loathed.

People approached me and offered condolences. It was awkward and weird because I could not find any words that would seem kind or compassionate outside of “He died peacefully.” He fell asleep in his chair and died. I would nod and thank people for their kind words saying, “He died peacefully,” over and over again. Inside I was screaming that he was a monster who treated his own children with such vitriol that I could not bear to be around them any longer because the hypocrisy, sexism, bigotry, and negligence was too much to take. I would take a deep breath and calm my mind. There is no point in holding a grudge over a dead man who did not seem to care about you…unless it suited him.

The only productive thing to do is to continue to live my life as fully as possible and offer care, appreciation, and love to my chosen family.

I am sad typing this. I am not sad that he is gone. I am sad at this story. That man never knew me. He never knew my potential. He never cultivated who I am outside of challenging me to overcome him and rise above his sexism and bigotry. He watched us nearly lose our home and lauded my abusive father. He gets no credit for my accomplishments and rarely celebrated them. I am proud of the work that I do as it gives meaning to helping others who struggle similarly as I did (in some ways). Grief is an oddity particularly when an abusive family member dies. We cannot change or control the past. We can learn from it and refuse to let it keep us in chains.

Thank you for reading.