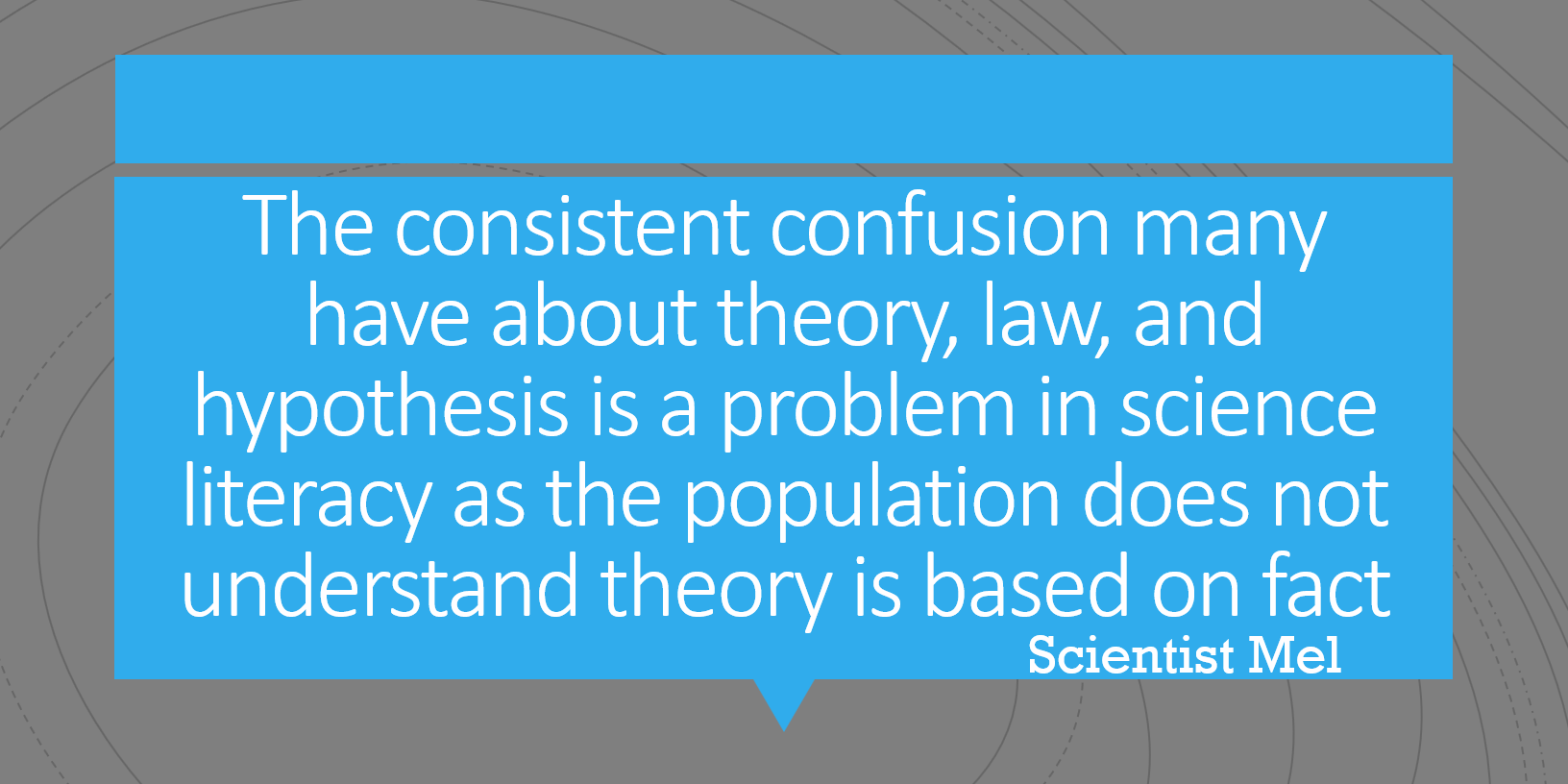 As a science communicator and educator, I encounter many in the population who conflate TV Detective THEORY with scientific THEORY and courtroom LAW with scientific LAW. Then there are others who do not understand the difference between HYPOTHESIS and THEORY. I hope to break this down a bit here to help aid in understanding the differences between each term.

Let’s first talk about what we see in society…

The consistent confusion many have about theory, law, and hypothesis is a problem in science literacy as the population does not understand that theory is based on fact. They see the word “theory” and think this is just a “working idea” without enough evidence to make it solid like a “law”. They are easily appointing a higher value to a “law” over a “theory” much like the court upholds a law and is somehow more important than a detective’s theory on “who dun it”.

Scientific laws are no more important than theories. It is important we understand that laws and facts make up theories. Both are exceedingly important and neither is lesser.

A scientific law states that the same cause and effect thing happens between two variables every single time within the same conditions. They are often expressed mathematically. It is important to note that laws can change if conditions are different…and exceptions can be made with new information.

Newton’s Laws (for example) 1. Bodies in motion stay in motion unless an outside force stops it moving. Bodies at rest stay at rest unless a force is applied to get them to move. 2. Force = mass x acceleration. 3. For every action there is an equal and opposite reaction.

What are the two variables in #1? Bodies and force. Bodies move and stop because of force.

What are the variables in #3? Action (via a force) and equal reaction. Increase/Decrease one, you get an equal result in a reaction.

These are laws because it happens every single time in the same conditions no matter what. It is essentially 2 things interacting. These laws state that this happens and covers the existing connection between force and bodies…but does not state why. Laws are facts that always happen in certain circumstances but without further explanation.

A scientific theory is an explanation of something that exists. Using the above example, we know that a ball falls down to earth when we let go of it. The ball is a body that is in motion towards the ground due to a force…gravity. Gravity is a theory as it is an explanation as to what force is pulling on the ball.

Evolution is a scientific theory. We know things change over time. We can see it on the bacterial and viral level as bacteria and viruses become resistant to medications. We also see adaptations to diseases that arise within populations of people. What is the evidence for evolution…this theory? We have 5 major components of evidence (facts) that need explanation…Fossils, similar embryos, similar DNA, similar physical traits, and similar behaviors. These things exist and we can see the progression of change in all them. After countless experiments involving empirical data (we will talk about hypothesis in a bit), the best explanation we have as to why these changes occur and these similarities exist is evolution through natural selection.

Another example…We have laws within genetics including the Law of Independent Assortment (traits evenly mix up and spread out) and the Law of Segregation regarding chromosomes that show how traits are passed from parents to offspring leading to dominant and recessive expression. Gregor Mendel developed them through his experiments but he knew nothing of DNA and the expression of genes. They finally could be explained once DNA and the understanding of its expression came to pass. The explanation as to why this happens is a theory involving inheritance. However, these laws only work in specific conditions. The Law of Independent Assortment has exceptions including the fact that traits can be linked on the same chromosome. This shifts the law slightly. Which is OK.

Facts are things that happen during an experiment. This is data. Scientists collect the data (facts) during experimentation to determine whether or not there is a cause and effect connection between two things.

This brings me to hypothesis… A hypothesis is a tentative answer to a scientific question involving 2 variables to show cause and effect.

A basic hypothesis is framed as an “If/Then” statement. From the previous data/facts example: “If the wattage of a standard bulb is increased, then the height of plant species XYZ will increase.” The data (facts) collected will either support or debunk the hypothesis.

A hypothesis does not have to be correct in order to be useful. It can be wrong if the data/facts do not support it. A hypothesis can lead to the correct direction for research. If the hypothesis is not supported, questions are asked as to why that is. In the above example, if the data did not support the hypothesis, we could try LED bulbs, change the wattage, test the lumens, or even consider temperature as a factor due to heat coming from the bulb. There are many questions that can arise from experimentation.

Let’s now consider that the hypothesis from the above experiment was reinforced. Let’s say that wattage of bulb had an effect on plant growth and height increased substantially with the 100 watt standard bulb compared to the other 2 plants. The fervent scientist would then investigate further that wattage is indeed the reason for the increased height. The investigator would then act as if the hypothesis is wrong. They would then test lumens, heat, type of bulb…all in different experiments to definitively prove that this hypothesis is correct.

A hypothesis is a tentative answer to a question. It can change midway through an experiment, shift variables, and even go in a completely different direction.

Hypotheses are used to replicate, debunk, and/or refine a scientific idea. People do not use hypotheses to debunk Newton’s Laws, Gravity, Cell Theory, or Evolution as these laws hold up in our natural world. However, as mentioned before, theories and laws can be and are often tweaked…but just a little bit (that “under certain conditions” thing…change those conditions, change what happens).

What is NOT a hypothesis? A theory, a fact, or a law.

Hopefully this clears up any misconceptions of the terms. If you have any ideas, questions, or comments, please feel free to leave them below. Thank you for reading and thank you for being here.