The Pseudoscience of PETA

PETA is widely known as an organization who claims to dedicate their work to saving animals. In reality, they kill more animals than save. The largest portion of their budget goes towards advertising. They can not afford to keep the animals they rescue, so they resort to euthanizing rather than funnel funds into adoption programs. PETA on twitter has blocked me. This was after a conversation I had with them asking them for their latest kill numbers…that thread for tweets can be found HERE

For this article…I am going to discuss the bad science PETA pushes in order to push their brand agendas.

PETA suggests in vitro testing as well as computational models are sufficient in determining a treatment is safe for humans. The simple answer? NO. The reason? Because there are multiple factors that determine whether or not a compound is a viable candidate for oral or IV introduction. A computer simulation does not take into consideration liver processing (if oral), blood brain barrier issues, as well as any other interactions that may occur if the drug is processed via liver into potentially toxic forms.

Now in vitro testing..squirting drugs on cells is not the same as introducing the drug into the body. There are multiple pathways to consider when making a drug. The liver breaks down drugs into different forms. The mode of drug introduction has to be considered when determining if a drug is administered orally or intravenously.

Let’s dive a bit deeper into this study…

The data seems effective with the line of MCF-7 (a cancer I have worked with). The problem? There is no data for the normal cells. There is no information as to  what this compound does to the non cancerous cells. Additionally…since it damages DNA, it might make it worse. The study specifically states that this compound could increase cancer activity. 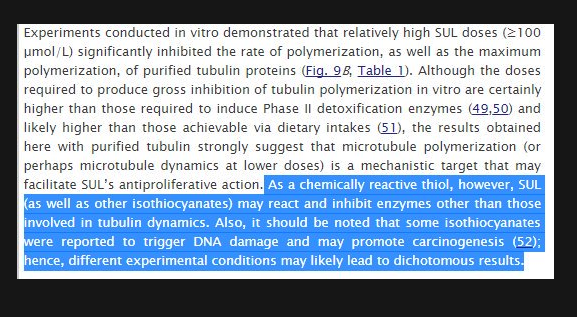 PETA uses this study to push for vegetarianism without fully disclosing that the study is not sufficient nor does it fully support the idea that broccoli consumption kills cancer.

The FDA site discusses why we still need animal testing (HERE) The main reason for animal testing is so humans are not killed or further harmed by research. Scientists can not squirt or inject broccoli compounds into people until scientists know if it is going to hurt or cause further damage to people. Computer simulations are not going to give substantial confidence that scientists are not going to kill people or contribute to cancer formation like the SUL (broccoli compound) can possibly do. There are many similar compounds like the broccoli compound that cause DNA damage aka carcinogens which leads to cancer. Animal testing is necessary so we can see the breakdown of these compounds via the liver, their effectiveness if injected, and if they have ANY toxicity or harmful side effects. In vitro (test tube experiments) and computer simulations do not give us the holistic effect, but they reduce research time giving us an idea WHEN to test on animals and IF it is even a considerable option. This reduces animal testing but we can not eliminate it without jeopardizing people.

PETA is irresponsible and unrealistic pushing agendas that potentially harm people. They use bad science with unsubstantiated conclusions in order to reinforce their brand. Huffington Post has openly reported on the kill numbers associated with PETA in that they destroy more animals than they find homes. PETA has no known active program to re-acclimate animals from zoos to the wilderness…Nor do they have any programs to find homes/re-introduction for rescued animals from illegal testing.

I suggest PETA contribute the majority of their funds to research INSTEAD of copious amounts of advertising to push their brand. Funding productive research will help science gain better tech hoping to lead to removing  the need for animal testing. I would also suggest PETA stop with frivolous lawsuits that require substantial funding and work to feed the pets they rescue as 88% of them are killed in their shelters. It would also behoove PETA to stop taking household pets and killing them. It would seem these lawsuits of stealing household pets and killing them is also a financial sink hole.

PETA is not a reputable charity…Nor do their kill rates show concern for the well being of animals. With no real financial support for the animals they “save”, no re-acclimation programs, no real funding for the shelters that house their rescues, or the adoption programs to find forever homes for pets…PETA proves to be a brand selling t-shirts and using bad science as part of their advertising. Consider giving to well established organizations that not only work to save animals but also spend money on feeding them, not killing them.