The Fashion of Pseudoscience and the Designer Nonsense 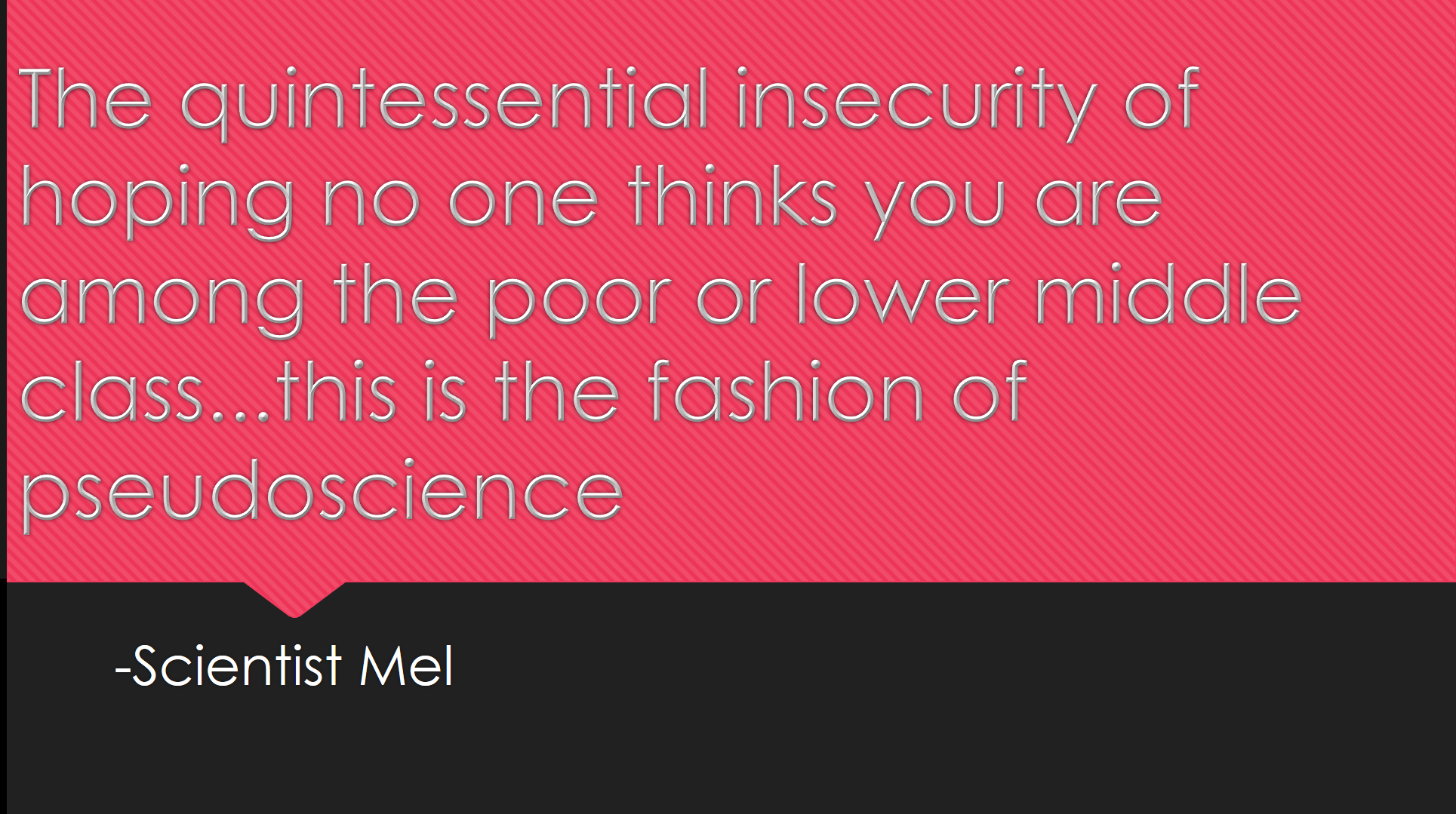 In the billion dollar industry of pseudoscience (supplements, weight loss, ayurveda, homeopathy)…people shell out big bucks for the chance to participate in the latest craze of designer nonsense peddled to a target demographic. There are many types of advertising associated with pseudoscience products. It truly is not very difficult to gauge which product is targeted to whom.

In a throw away culture of Western civilization, the ability to indulge in designer nonsense is in many ways a sign of privilege.

I am not focusing on standard supplements and inexpensive weight loss products clearly targeted to lower income families…though those particular companies are inherently predatory in their own right to push fake science in order for struggling families to shell out dollars for quick fixes for illness and weight loss…I will address that a bit later…I want to focus on the ridiculously expensive fake science pushed towards people who have excess money and can afford to throw away dollars on what I call “designer nonsense.”

Let’s take a look at Goop…

Goop is a website where the high end of snake oil peddlers aka “pseudoscience pushers” work to make women feel special with products that have absolutely no scientific backing whatsoever.

They initially tried to make their vitamins and supplements look scientific. However much of their site is riddled with nonsense. Nothing is backed by any studies, some statements walk a line of truth but fall right off at the end…if ever you are curious as to how to spot pseudoscience and an in-depth rip apart of Goop and their “auto immune disease” claims have a gander at my video found HERE. This website pushes extremely expensive products peddling fake science in an attempt to convince well to do women to be a bit better with detoxifying shower heads ($200), supplements that cost $75 a month, vagina rocks to detox your vagina ($80), and other “must have to be better than everyone else” products.

I used to criticize Goop for being irresponsible as they have blog posts from people who claim to be experts in medicine…one is a medical doctor who says he had a paper one time at a conference where you have to be a member to read the paper and no one can read it now. This was on auto immune disease. He basically claimed people could reverse symptoms just by changing their diet and injecting supplements. I reached out to this doctor asking for his paper so I and others (including Auto immune research groups) could review this paper, he did not respond.

Needless to say, when we look right at this…Goop is not meant for people who seriously need health care. The US does not have a national healthcare system. They do have the ACA which is currently in peril as current law makers wish to reverse the good this law has accomplished.

Anyone who truly suffers diseases would rather go to the doctor than reach out to Goop for fake remedies.

So instead of regularly criticizing Goop for peddling nonsense as a potential option to reverse AI disease, I am going to focus more on what it actually is…a means for wealthy people to buy into something designer so they can appear to better than everyone else. They are the “haves”. They have the privilege of health care and see this as a way to one up “have nots” (those without disposable income and often times little to no health care).

The “haves” and the “have nots” are a cornerstone in many facets of cultural anthropology. There are always those who have the things and those who do not have the things. A study was performed and published in March of 2013 citing the main people who use supplements are wealthy, healthy, have insurance, eschew smoking, and exercise regularly. These are people with access to nutritious foods, exercise equipment, health care, and ample self care information.

Let us take a look at social class stereotypes…

Paper recently published in Current Opinion of Psychology suggests that lower income families are seen as less competent than those of wealthier families. These social class distinctions start in early childhood.

Is there a fear that individuals of upper middle class and higher could be perceived as lower income and therefore not competent?

Paul Piff is an associate professor of psychology and has studied wealth and social hierarchies. In one study, in collaboration with University of Berkley, people played a game of Monopoly. The game was purposely set up to ensure one participant became wealthy quickly. Mean behavior was later observed by researchers showing an increased amount with increased wealth. Winning, wealthier players acquired dominant postures and belittled the poor players. Additionally, rather than equally share the free pretzels in the room, the wealthier, winning players ate more pretzels. Not only did the wealthier, winning players transition to a status of mean-ness and greed…they also took more than their fair share.

So this begs my previous question…are those with disposable incomes afraid to be seen as poor?

An article found on a US NEWS and World Report Money blog discusses what it is that rich people worry about…(Please bear in mind this is not a scientific study, but it is clearly an opinion.) What the author suggests in one portion of the article is that wealthy people worry about “keeping up with the Joneses”. If their wealthy friends buy an expensive, new thing…they should purchase something similar. Wealthy people want to maintain their appearance of high monetary status.

Gwyneth Paltrow is the spokesperson for Goop. She has a substantial voice for women who want to age and look like her. She has her own personal chef, personal trainer, endorses questionable plastic surgery (and has speculation of having her own surgery), as well as access to premium health care. If every woman had access to these things (including a custom home gym), they would have similar aging outcomes. No product at Goop is going to give the results hundreds of thousands of dollars over 20 years provides.

Gwyneth is not only peddling her impossible lifestyle, she is betting on the inherent privilege and insecurities of wealthy women to pay for her designer nonsense as a means to show they are among the elite. These women never have to worry about healthcare, proper nutrition, exercise, or money. They are the upper middle class who want to fluff up their peacock feathers trying to pretend to be women with excessive disposable income.

I would daresay any woman with a substantial amount of wealth (top tier bourgeoisie) would not likely waste their money on nonsense but would certainly be the first to peddle it. If you buy into the designer nonsense the markets of pseudoscience peddle, you are showing your privilege and those in the upper class are likely laughing at you as you give them your money.

*A note on pushers of pseudoscience who prey on individuals with minimal income…weight loss schemes, supplements to reverse diseases…you are dangerous predators. You prey on the people who have limited income, little access to healthcare and nutritious foods. I regularly call those groups out who would make money off of the pain of others with the promise of impossible results with the hidden and hard to see disclaimer *These statements have not been investigated by the FDA.” Science communicators like myself will actively work to educate the populace debunking your nonsense and directing people to sources that will help them.

Do yourself a favor and don’t buy into designer nonsense and the fashions of pseudoscience. Do your research and look to accurate sources. If you want to throw away your money, please consider charities instead. You can find a wonderful list HERE There are studies (most recently by Elizabeth Dunn) that show giving to charities makes you happier. How about you spend your disposable income there.

(All references are hyperlinks within the text)