The Case Against the Monsanto Verdict: Why this verdict is harmful. 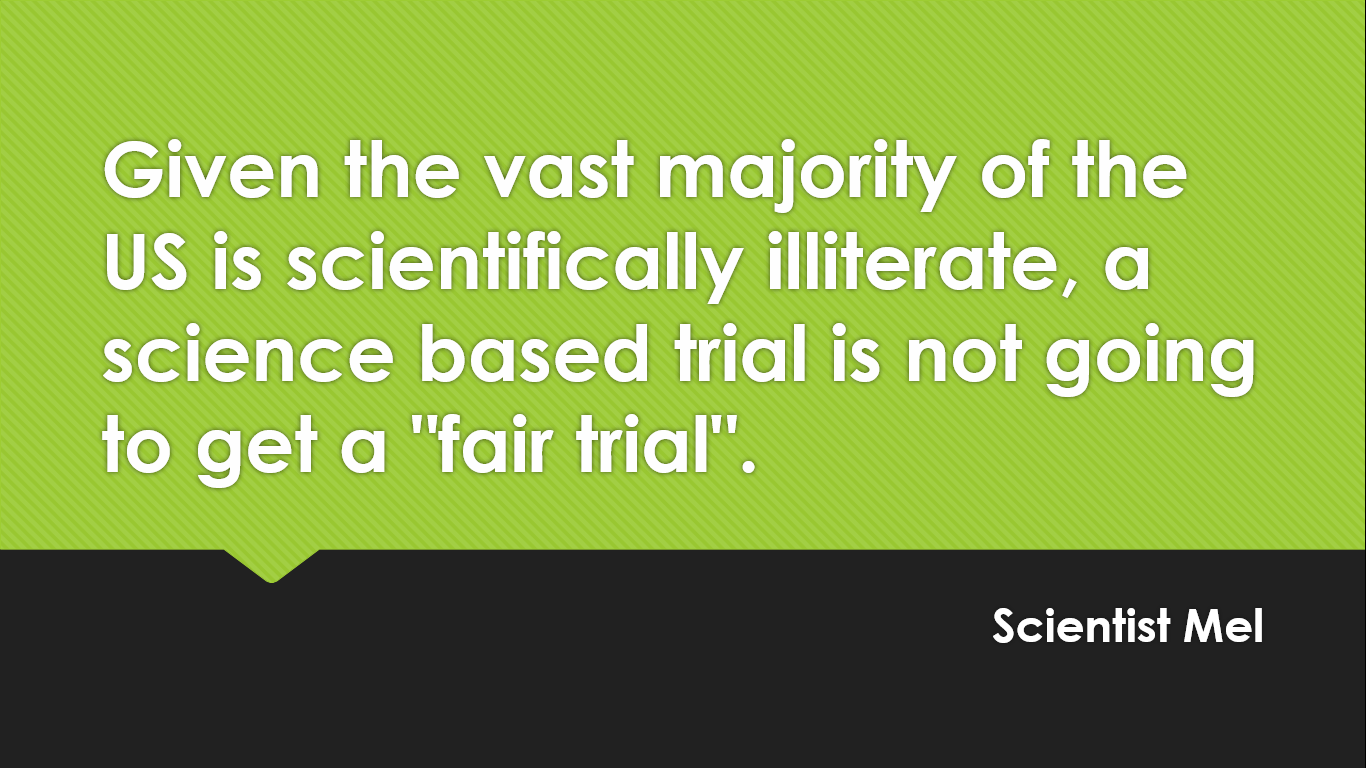 The verdict delivered in favor of Dewayne Johnson on August 10th, 2018 shook not only consumers around the world, but scientists as well. The reasons this verdict has caused concern for each community are completely different…and both responses are cause for collective concern.

Let’s take a look at consumers…we have a scientific literacy crisis as it is with nearly 1 in 4 Americans who think the sun revolves around the earth. Most Americans get their science education from the news. The news has not been the best source in accurately reporting science. For all intents and purposes, we have the media to blame for the antivaxxer movement via The Daily Mail. The misrepresentation of science by the media walks a fine line of scare mongering at times as well as irresponsibly reporting studies as definitive proof for a concept ie: drinking wine burns the same calories as a gym session. (This is not what the study says.)

In a country where the vast majority are scientifically illiterate (some including reporters), click-baity misrepresented science and health headlines already cause a stir and can even cause panic. Now courts are awarding verdicts to people who have no scientific evidence to back up their claims. We have the blind leading the blind in media and now in the court system.

What are the facts with Monsanto? There is no substantial evidence that glyphosphate causes cancer. All evidence for this link is weak. The jury members are not likely capable of understanding the complexity of cancer, risk factors, scientific evidence, as well as the fact that mouse evidence of cancer does not translate to human risk.

Non Hodgkin’s lymphoma is one of the most common cancers in the US.

Your odds of developing this type of cancer is 1 in 47. Additionally,you can not prevent this type of lymphoma. It is also important to note that risk factors are not definitive in determining if you will get cancer. If this was the case, every single person who smokes cigarettes would get cancer. The general public is regularly educated on the risks of smoking, but they are not really “educated” on what risk factors actually mean. An “increased risk” does not mean you will get cancer from said risk, it means your percentage has slightly gone up.

Some cancers have an increased risk because one has sex, walk outside, drink any alcoholic beverage, are of a certain ethnicity, malnourished, have an infection, don’t exercise, eat red meat…an increased risk does not mean you will get cancer. However, the more risks taken, the greater the chance of developing certain cancers. Cancer is usually not caused by an isolated factor. Environmental factors coupled with lifestyle choices, genetics, age, and other illnesses contribute to the onset of cancer.

Here we have a group of laypeople in a jury delivering a verdict who are likely scientifically illiterate and only needed to concede that the introduction of glyphosphate into his life increased his risk at any percentage (even if marginal to a normal exposure rate for every other person on the planet). The jury only needed to be convinced that an extra chemical might have tipped the balance towards developing cancer

What about animal studies? There is evidence in mouse studies to show it is carcinogenic at VERY HIGH DOSES. Essentially if you inject a mouse with a large dose of glyphosphate (not a dose any human would ever encounter in regular use), carcinogenic properties arise. Though there is evidence to show mice get cancer with a massive dose of glyphosphate, extrapolating this to humans is not wise as this rarely produces accurate results. Human and rodent metabolic pathways are so different that carcinogenicity can not be determined in humans based on rodent studies alone. Dosage is important when it comes to toxicity and carcinogenicity. Just about everything on the planet can kill you (even what someone would consider benign things…water, sugar, etc..) What it comes down to is dosage.

With dosage, glyphosphate, and cancer in mind…An interesting observation is the fact glyphosphate exposure has increased in California communities but there is not an increase of non-Hodgkin’s lymphoma diagnoses.

Now that we have the evidence and thoroughly discussed cancer as well as the lack of evidence it is caused by glyphosphate in humans, let us discuss how this verdict is harmful and irresponsible in the court system.

People often confuse “courtroom evidence” with “scientific evidence”. The legal concept of evidence is vastly different from scientific evidence in that jury verdicts (as juries are tasked with determining truth) are not bound by strict rigors of science. There is no “peer review” of jury verdicts other than an appeal. If the prosecution in a case does not convince a jury that the defendant is guilty, the jury can claim innocence and nothing can be done otherwise as double jeopardy is not allowed…nor are judges allowed to overthrow acquittals. There is no “peer review” of acquittals involving jury decisions. All lawyers have to do is convince  the jury to see their perspective through the “evidence” they present. Evidence carries far different meanings in the legal sense than in the scientific sense. The only “peer review” within the process of jury decision is within the jury on what they think the truth is…and given the vast majority of the US is scientifically illiterate, a science based trial is not going to get a “fair trial”.

The judge who allowed this case to go to trial acted irresponsibly.

The big problem with this verdict is that many in the US will make the assumption that glyphosphate (RoundUp) causes cancer and Monsanto did this on purpose. Regardless of the vast majority of scientific evidence refuting this perspective, the general population is in danger of the bandwagon effect on hopping aboard the GLYPHOSPHATE CAUSES CANCER train and become susceptible to predatory pseudoscience practices. We already have the media to thank for antivaxxers and the consistent rise of measles. Now we have headlines stating a jury said Monsanto is wrong and awarded this man money for his cancer…a jury who does not understand that studies older than 5 years are not really valid, mouse studies are not the same as human studies, 89,000 families were studied with no glyphosphate effects on them, increase in risk factors does not mean confirmed cancer causation, misunderstanding of outlying (rare) statistics versus the general average, probably does not mean YES…etc…this was never going to be a “fair trial” once it got approved to continue through the court system.

We already have pseudoscience pushing groups on the GLYPHOSPHATE IS IN CEREAL OMG bandwagon utilizing scare tactics to push their agenda. There was no “peer review” with the report that was published by The Environmental Working Group who carries a “sciencey sounding name of authority” but does not actually use science to make their points. This is one of many examples to come because of this verdict.

America is scientifically illiterate and gets the majority of their science education from the news. The news plays a role in promoting bad science without fleshing out the actual science to teach the public about WHY the jury verdict is not necessarily the truth as it is not held to the same standards as scientific conclusions widely accepted in the community that has withstood multiple attempts to disprove it.

Mr. Johnson did not have to prove Roundup caused his cancer. He only needed to convince a jury that it maybe played a role if perhaps he had chosen a different line of work. It is far more likely that he would have developed this cancer anyway as there is no real way to prevent Non-Hodgkin’s Lymphoma as most people have no real risk factors that can be changed.

I leave you with Robert Frost…A jury is 12 persons who gets to decide who has the better lawyer.

Educate yourself. Accept all evidence…even if it is evidence you do not like.

Edit: I am adding this statement as I want it understood that I think Mr. Johnson’s development of cancer is very sad and unfortunate. Having performed cancer research, I have sympathy for people who suffer from cancer. The above piece I wrote is focused on facts and not feelings. We can not place blame on things that have not caused our illness. My deepest sympathies go to Mr. Johnson and his family. Cancer is one of the worst biological betrayals our bodies can do to us.