Narcissists – A Spectrum of Abusers 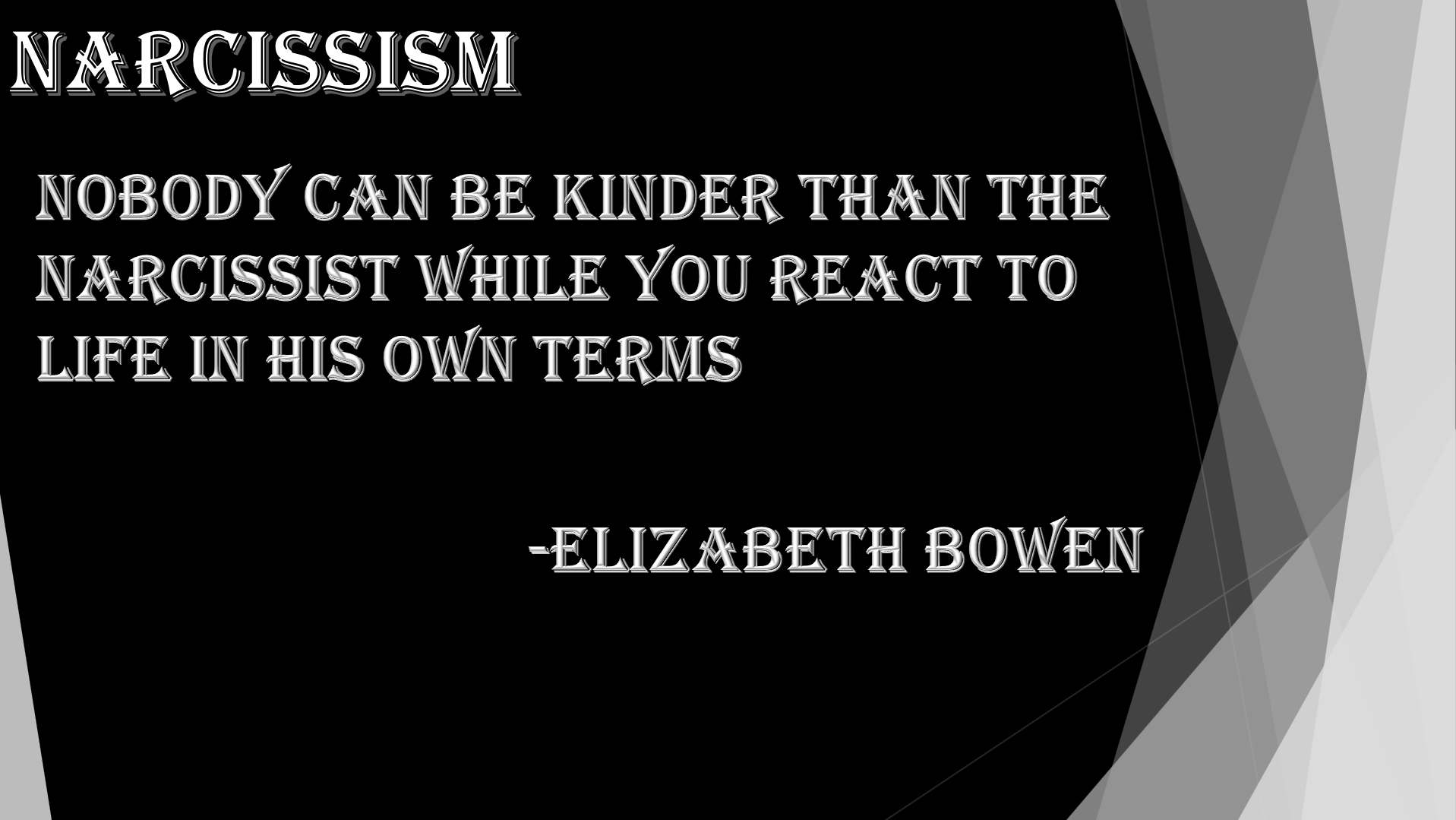 I have often discussed narcissists on my show in varying forms. I have mentioned their roles in trolling, social media addiction, and as online predators/stalkers. Much of what I will be discussing here will be more of a collection of what I have fleshed out in my videos regarding what narcissists do in these forms as well as how harmful they can be. I will also discuss ways to protect yourself when dealing with narcissists and what to do if you have an active narcissist in your life trying to harm you.

My sources can be found within the text in hyperlinks. Please feel free to download any of my slides in relation to my previously mentioned shows under the resources section of my website. There is a lot of information available on narcissists and I have links to the sources I have utilized. Additionally, much I am discussing is what I have learned from personal experiences as well as from therapists.

The first thing we need to do is understand narcissism.

I will refer to the victims of narcissists as “human tools” not because I blame victims for being preyed upon by narcissists, but to reinforce the message that narcissists do not see their victims as people with feelings. They truly do not care about their victims in any form or fashion. So to understand the narcissist’s thought process, I am using that phrase to make certain this message is clear as it can make cutting a narcissist out of one’s life that much easier.

Much like everything, narcissism is a spectrum. A narcissist can have varying degrees of being harmful (Signs and symptoms). The first thing we need to understand about narcissists is that everyone is expendable and disposable. People are tools to boost their ego and fantasy world. The bigger the supply they have of tools, the more fulfilled the narcissist is.

Narcissists are rampant on social media and internet forums. They can generate a fake world where they are terribly important, worshiped, praised, and coddled by followers through engagement. They can range from pretending to be someone they feel would be highly valued in knowledge and intelligence to a Romeo of sorts collecting lovers as a means to reinforce their personal worth. The narcissist works to control their human tools to constantly feed their ego. They gain a type of high from controlling others, especially if they manage to control those they feel are far above their personal and professional status in life…a type of “punching above their weight”.

In using the internet, the narcissist can hide behind anonymity only sharing what they want their human tools to see. It will always be just enough to be believable, not causing their tools to question them in the beginning. They will work to develop a trust based on lies so that their human tools will accept what they say without question. Deep questioning is something the narcissist wants to avoid. They will have pre-packaged answers ready and waiting for the light questions. They have worked hard to develop this online fantasy world in order for their human tool followers to boost their fragile egos.

It is important to note trademark characteristics of narcissists.

They will not take responsibility for their actions. They may say, “I’m sorry.” but they will not actually mean it. They are saying the words the human tools need to hear in order to keep them around so they can continue to control  them. They lie, and lie, and lie with expert skill. They have developed their skills over a long period of time working to determine which ways of deception are the most successful. They know exactly what to say, when to say it, and how to say it.

They feign victim-hood or even generate pretend problems to gain attention causing their human tools to feel valued and needed. They will also dole out compliments like candy…they will make you feel amazing and spend a vast amount of time convincing their tools how wonderful they are. Their human tools will in turn develop quickly a fierce sense of loyalty because of how amazing the narcissist has made them feel.

There is no reason to question the kind person on the other end of the screen when they have acted in ways you desire and stated everything the tool has ever wanted to hear from another human being.

Some narcissists will remind their tools of how kind and generous they have been in order to hide the fact they are manipulating them. It can be incredibly subtle. Those particular narcissists are inherently dangerous in that they can fully control their tools with ease because they are just so incredibly nice and charming. How could they ever be bad? They are not “bad” until the illusion falls and their fantasy world is threatened. They then resort to emotionally abusive measures to protect their fake world and image. Their ego is of the utmost importance. The abuse they give varies and can be subtle or incredibly pronounced.

Narcissists can not keep up the facade forever, especially if the human tools start to question.

What happens when something seems too good to be true and a human tool starts to question?

Male narcissists often use the female tools to demonize the other female victims under the guise that those women tools calling out abuse are more likely to be believed than if the man spoke out. These men actively abuse the “always believe the victims” stance…thus feeding the slander campaign and further hurting the victims.

While all of this seems exhausting to healthy individuals, it is important to note that narcissists have a need to have their egos inflated by others. It is an uncontrollable need that can not be managed outside of professional help. Since the narcissist is incapable of accepting responsibility for their actions, rehabilitation is extremely unlikely. There are conflicting views on whether or not a narcissist can be cured but it largely has to do with the narcissist recognizing there is a problem. The narcissist has to want to change and realize they have issues. Recognizing this means they acknowledge they are flawed. This goes against everything a narcissist has tried to build with their fantasy world of self-importance. Facing the reality that they are not as important/wanted/needed/desired/etc. and have deep issues associated with self-worth, lies, and lack of true empathy would in many ways be detrimental to the narcissist. When the fantasy falls and the human tools see the narcissist for what they are, the damage has already been done, the abuse ensues and the narcissist will punish their tools.

The damage caused by the narcissist, even the most subtle of narcissists is incredibly substantial.

I am now shifting to calling the “human tools” victims as I will be discussing the emotional damage narcissists do to others.

Victims of narcissists question everything in regard to their relationship with them. They have had their self-esteem destroyed and become so reliant on the narcissist and their interactions. Some victims lose their sense of self as they wonder how this could have happened to them. They look back at the things the narcissist accused them of hopefully recognizing they were being manipulated. Some victims feel incredible guilt as they learn that they have been implements of abuse towards the other victims being tools for the narcissist. Even if they were warned and ignored the warnings, they feel shame and foolish.

Victims of narcissists are inherently vulnerable as they developed a need for the narcissist. It is in the best interest of the victim to seek therapy to help them understand how this happened. What is of the utmost importance is that the victim realize the narcissist does not love or care about them. This revelation in itself is quite a blow. However, it can be freeing. It is much easier to cut a terrible person out of your life who never loved you than to hope that there can be some reconciliation. Victims have a danger of returning to the narcissist especially if they have developed a need for them. If they are willing to accept this false reality including the abuse the narcissist doles out to feed their need of the narcissist, they may return to the relationship. This is why therapy and accepting all evidence is exceedingly important for victims of narcissists. They need to question everything and accept the reality of the situation or they are at risk for falling back into the world of the narcissist. It is a vicious cycle of abuse if the narcissist is allowed to stay in their life.

What do we do to combat narcissism?

If possible, cut off all communication with the narcissist. Keep records of all texts, emails, conversations, and sock accounts for social media. If the narcissist starts a smear campaign, alert friends, family, and even work (in severe cases) that someone is trying to cause harm. Get advice from a lawyer (in severe cases) and start a paper trail. Document everything and give copies to trusted people. Rely on friends who have been known for years. Keep a list of friends and victims of the narcissist as they can be used as tools for abuse. Cut off communication with them. Realize that the narcissist can not harm people who do not care what they and their tools have to say. It takes a lot of will to ignore the slander and lies being told. The caring people in the life of the victim will not listen to slander and correct as it is heard. Trust those people and lean on them.

I can not emphasize enough how important it is for victims of narcissists to seek therapy. Therapists are experts who not only help navigate such difficult waters, but they are also teachers. Their lessons on narcissists are invaluable and can help prevent future engagement with other narcissists.

How to avoid narcissists and in turn not be a human tool?

Question everything. Accept all evidence. Realize social media and online forums are a hotbed breeding ground for predatory people including narcissists. These individuals will only show you what they want you to see. If it seems too good to be true, it probably is. Persistent yet polite questioning will reveal the narcissist. If you have not seen the full evidence with your eyes, do not take it at words alone. Ask for evidence and don’t be ashamed to do so. (I hope to have a separate article or a show soon about how to ask for evidence and question politely to avoid escalation)

Science has saved my sanity in dealing with narcissists. I question everything. I accept all evidence. I look at statements with scrutiny. I ask for evidence. I offer evidence to back up all of my statements. I see narcissists for what they are and educate myself on what they do. They do not care about me. This is not my fault. They are incapable of actual love…at least not love for anyone else, just themselves.

Arm yourself with knowledge and stay strong. There is no shame in therapy. If you feel you are a victim of a narcissist, please consider getting professional help. It will enlighten and educate.

As an aside…a perfect example of narcissistic behavior is described well in this music video by Henry Rollins, called LIAR